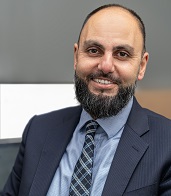 Riverway Law is led by Fahad Ansari, a practising solicitor with over 15 years of immigration, asylum and nationality law experience.

Fahad is a Recommended Lawyer in the 2023 and 2020 editions of The Legal 500 in the areas of Immigration: Human Rights, and Civil Liberties/ London.

“Fahad Ansari has a burgeoning practice in national security cases in the High Court and Special Immigration Appeals Commission and has achieved remarkable results.”

Fahad qualified as a solicitor in 2009 having studied law at University College Dublin and De Paul University, Chicago. He obtained an LLM in International Human Rights Law from the National University of Ireland, Galway.

Fahad is accredited as a Senior Caseworker under the Law Society’s Immigration and Asylum Accreditation Scheme, a stringent process involving exams and regular re-accreditation. He is an experienced advocate at both the First-Tier Tribunal and the Upper Tribunal.

Fahad has secured tens of thousands of pounds in damages for clients who were unlawfully detained.

Fahad is regularly instructed in cases involving a national security element including deprivation of citizenship, exclusion from the refugee convention and deportation following convictions for terrorism offences. These cases often result in proceedings before the Special Immigration Appeals Commission (SIAC) which involves the use of a Closed Material Procedure by which appellants and their representatives are not shown the evidence relied on by the Home Secretary.

Fahad regularly writes about current affairs and has had articles published in the Guardian and New Statesman. He is regularly invited to comment on legal developments by numerous media outlets including the BBC, Sky News, CNN, TRT and Al-Jazeera. Fahad has spoken at international conferences around the world including at the UN Human Rights Committee in Geneva.

‘Daesh Returnees Should they be allowed to return to the UK?’, TRT World, 4 March 2019 Panel discussion on deprivation of citizenship alongside Richard McNeil Wilson, Afia Ahmed and Ellie Green

BBC News, 6 October 2012 Interview in relation to extradition of British citizen Babar Ahmad to the US

‘Clause 9 and the erosion of citizenship rights, Guardian Podcast, 9 February 2022’ Fahad Ansari discusses the development of the deprivation of citizenship policy, its human impact and how matters will deteriorate further with the Nationality and Borders Bill.

‘’Maximum Suffering.’ A Man Stripped of His Citizenship Sheds Light on the Potential Impact of the U.K.’s Nationality Bill’, TIME Magazine, 10 February 2022

‘In a landmark case, an Israeli man is requesting UK asylum, saying he’ll be made to participate in ‘apartheid’ if he returns’, Business Insider, 19 September 2021

‘Jewish anti-Zionist to plead his case for asylum in the UK’, Al Jazeera English, 16 September 2021

Home Office awards damages to man falsely linked to 9-11 after refusing him entry to the UK on eve of Brexit, CAGE, 10 September 2021

‘Man held by police despite winning legal fight over his British citizenship released’, Sky News, 8 May 2021

‘Man who won legal fight to stop his UK citizenship being revoked subject to ‘campaign of harassment”, Sky News, 1 May 2021

‘Shamima Begum: How ‘Isis brides’ have been left marooned in Syria as the civil war drags on’, inews, 17 March 2021

‘The politics of refusal: How Muslims can resist the West’s hostile gaze’, Middle Eastern Eye, 25 January 2021

‘How Muslims are challenging Islamophobia by refusing to condemn terrorism’,  Metro, 17 December 2020

‘Victims of crime being handed over to immigration enforcement’ Guardian, 14 May 2018

‘Home Office official tells man facing deportation: ‘My job is to piss you off’, Guardian, 9 May 2018

”Make a big song and dance and get publicity’ to become a British citizen’, BBC newsbeat, 31 August 2017

‘Knee-jerk counter-terror bill will not make the UK any safer’, The New Arab, 13 February 2020

‘Criminalised for Caring: Has the CPS lost its moral compass?’ CAGE, 28 June 2019

‘The Home Secretary can legally deprive Shamima Begum of her citizenship – but he shouldn’t’, Free Movement, 20 February 2019

‘It’s ridiculous to claim our extradition treaty with the US is fair’ Guardian, 27 October 2011

Riverway Law Ltd (trading as ‘’Riverway Law’) is a private limited company registered in England and Wales (Company No: 08562850).
We are authorised and regulated by the Solicitors Regulation Authority (SRA No: 655003).
Our registered office is at Unit 30, 1 Empire Mews, London SW16 2BF, which is also our principal place of business.
Our sole director is Fahad Ansari.